…the Together for Europe Munich experience (30.6 – 2.7.2016) had it all: ENCOUNTER with a great variety of people, single-minded in their determination to face up together to the FUTURE, as well as testimonials of RECONCILIATION that showed how a journey together is possible. In the context of recent events in Munich and elsewhere, the message of Together for Europe is now more timely and urgent than ever.

Here are some impressions from participants (in the original language):

“Yes to bridges of mercy. Yes to discovering others and their rich heritage. Yes to understanding that we are truly “one thing only”, that there is a unity and a fraternity to be worked for and that we must find the ways to “break down” the many “dividing walls” “. These were the words of Andrea Riccardi, founder of  the Sant’Egidio Community, red by Marco Impagliazzo (president), expressing the spirit and the commitment of the 5000 participants, present in Karlsplatz (Stachus) in Munich, on july 2, for the final Outdoor Rally of Together for Europe 2016.

Unity is possible; reconciliation opens up the future; a culture of relationship and mercy; mission and future; were the four main guidelines of the afternoon. Maria Voce, president of the Focolare Movement invited everyone to “sign” a solemn commitment for unity: “We commit ourselves here, today, to be catalysts of this change, catalysts for a new vision for Europe, so as to speed up the journey towards unity by starting a profound dialogue with and for all the men and women on earth”.

Among the messages of greetings, Pope Francis and the Ecumenical Patriarch of the Orthodox Church Bartolomew I send their support.

Testimonies of reconciliation between churches and communities followed: “Reconciliation opens to the future”, stated Gerhard Pross from the Streering Committee of Together for Europe: “Although we are and will be different, we want to live in unity, to be enriched by our diversities and spread it to our cities and allover Europe.”

Cardinal Kurt Koch, president of the Pontifical Council for Promoting Christian Unity (Rome) explained that a universal network of friendship exists from 15 years, and Bishop Frank Otfried July, vice-president of the Lutheran World Federation: “There are many experiences that we are living together as churches: we work for refugees, we pray together; we want Christ to be the center of Europe”.

The Metropolitan of the Orthodox Romanian Church of Germany, Central and Northern Europe Seraphim Joanta (Nuremberg) shared joys and sorrows of his mission: “We suffer for the fundamentalist forces that threaten to destroy the efforts of unity among Christians. Moreover young people are missing  in our churches. But we trust in Christ and in this network of brothers”. Then a poignant and prophetic moment followed: several representatives of Christian Churches and movements have pronounced the “Our Father”: “It is a prophetic sign of reconciliation and forgiveness” – explained Rev. Olav Fykse Tveit, Secretary General of the WCC – a sign that we don’t want to forget ever again”.

The voice of youth was powerful and full of hope: “I dream a Europe more friendly and less individualistic, said Mary of Czech Republic -“Europe begins with me, because I am Europe”.

“Together” is another keyword of Together for Europe: “In 2017, there will be the Jubilee of the Reformation – told the Evangelical Bishop Heinrich Bedford-Strohm, president of the Lutheran Confederation in Germany – and we want to live it together: Evangelical and Catholics”.

And Card. Reinhard Marx of Munich, president of the German Catholic Bishops’ Conference: “We have to recognize the signs of unity we are already living: we are not separated, we want to witness Christ together.”

The final message, read by the leaders of Christian Churches and communities expressed the fruits of the common path and the next steps to be taken: “Europe must not become a fortress and build new frontiers. There is no alternative to being together. We ask all Christians (…) to overcome the divisions. Our commitment: we live the Gospel of Jesus Christ and bear witness to it with our words and deeds. We are committed to building up humanity and peace in the world.” 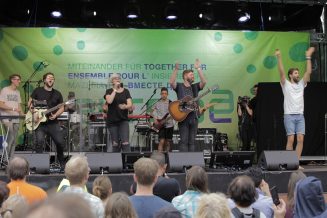 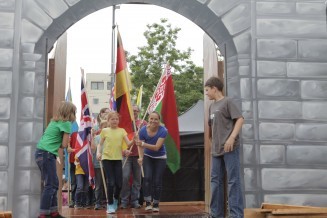 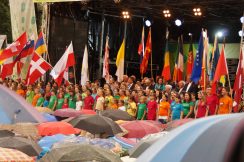 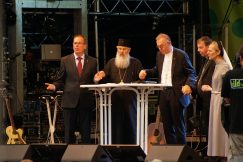 “Europe is going through the dark night of its own principles, the dark night of its dreams. (…) We believe Together for Europe is something which can inspire individuals or associations in their commitment to a free, reconciled, democratic, supportive and fraternal Europe”. Steffen Kern of the Evangelical Confederation of Wuerttemberg continues the reflection on Europe and hope: “Why should we continue to hope as Christians?”. In Stuttgart we have opened the “House of Hope” that welcomes women in trouble and lonely people. We want to witness our commitment that God never abandons anyone”. Thomas Romer (YMCA, Munich) explains that the strength of our continent is Christ and his Gospel: “Jesus is there even in the storms: we need to have faith. He climbed onto the boat to save us”.

This afternoon the Congress opened its doors to dialogue, confrontation and projects. The round table on “Christians and Muslims in dialogue” focused on the need to get to know each other, meet and work together on social and cultural challenges. Pasquale Ferrara, the new Italian Ambassador in Algiers, stressed that dialogue does not happen among cultures or religions, but among people: “We need to be more concrete, to stick to reality”.

Imam Baztami invited everybody to go out of our confort zones and meet different people. Many ideas and projects emerged from the debate among th philosopher of religions Beate Beckmann-Zoeller, dr. Thomas French, the Evangelical pastor Amberg and the french Bishop Michel Dubost. “The remedy to the division between Christians and Muslims is “otherness”, which means to consider the other as a brother, a sister”, said Gérard Testard of Efesia (France).

At the round table “Towards sustainability in Europe” card. Turkson, the environmental engineer Daniel Renzi, Hans-Hermann Böhm, and other experts invited to follow Pope Francis’ invitation to have a serious debate on climate change and ecological issues. Card. Turks concluded that ”sciences and religions should talk together, religions should talk together, and all of them should give their contribute to society together!”.
“Martyrdom, a painful witness of Christians today” is the title of another round table. Michael Brand, member of the Bundestag was present. Concerning the present european situation, he recalled a phrase from St. Boniface: “We do not want to be like dumb dogs”. “Personally I think that, if the terrorist threat comes from abroad – he said – inside our borders we are attacked by an aggressive secularism. I do not fear Islamization of Europe,rather the decrease of Christian faith”. 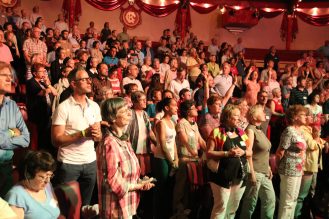 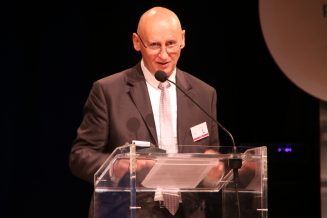 Encounter, reconciliation, future. These are the words of the 4th international edition of Together for Europe. Since 1999 more than 300 Christian Movements have made a path of reconciliation, mutual understanding and unity from 1999 and 200 of them are present here, at the CircusKrone in Munich from june 30 to july 2, 2016. Today 1.700 people from 40 countries arrived for the Congress of the representatives of the different Movements wishing to give their contribution to today’s european challenges with the Christian values. This morning opening session was entitled: “The Holy Spirit Works in our Time”. 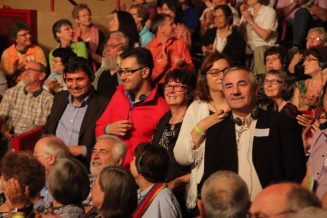 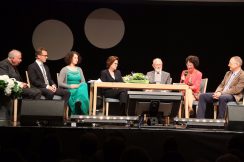 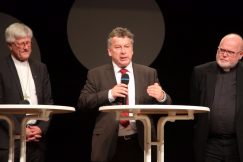 Martin Wagner (YMCA Munich) one of the moderators welcomed everybody: “Reconciliation is our keyword, we need it, we want to be ambassadors of reconciliation: we already experienced it. This is our future. Our goals are sharing, working together for unity and above all to give our contribution as christians to all the challenges Europe is facing today”. Then Gerhard Pross (YMCA Esslingen) addressed the 1700 participants: “God wants us to walk together towards unity”. And card. Walter Kasper (Catholich Church): “500 years of division is enough: we have a commitment to unity, otherwise we betray Jesus. The unity of our Churches is now even more important considering that European unity is in danger”. Bishop Krause (Evangelical Church): in 2007 we, christian movements, committed ourselves for “7 Yeses” and subscribed to the Manifesto for a united Europe: we had a dream, we prayed and hoped and God answered”. And Sr. Lioba Ruprecht: “We need to build the culture of alliance”. Hartmud Steeb of the Evangelical Alliance: “In the ’90ies we started a common dialogue; God has prayed for our unity: encounter, hope and future are words that will accompany us in the next days”.

The afternoon was dedicated to 19 forums on social responsibility, integration, economy, ecumenism, pastoral challenges, youth and Europe, marriage and family, reconciliation, evangelization today, and many others. Movements and communities have shared experiences, activities and projects, but also faith witnesses. “The cost and reward of unity, overcoming frictions and conflicts” was well attended and card. Walter Kasper said that one of the main need in the ecumenical movement is forgiveness and reconciliation”. “Reconciliation needs hard work”, said Walter Kriechbaum of YMCA Munich, “through reconciliation we will be healed; through reconciliation, we become messengers of unity.”