In Trento, on May 3, a cultural moment in the great hall of the Vigilianum and an Ecumenical Prayer Vigil.

In Trent, the Feast of Europe was organized by the six Movements which have been  cooperating with Together for Europe for many years. These are the Alliance Dives in Misericordia, the Neo-catechumenal Way, Cursillo, Focolare Movement, New Horizons and Via Pacis. The event immediate got the support of the Episcopal delegate for Ecumenism and inter-religious dialogue, Fr Cristiano Bettega.

The date chosen was May 3, 2019 and it was made up of two distinct parts: a cultural event at the Vigilianum followed by an ecumenical prayer Vigil.

The main hall of the Vigilianum, which seats about a hundred, was packed. Taking part, among others, were Fr Joan Catalin with members of his Romanian Orthodox Church, the Lutheran coordinator Mrs Berbel with a member of her community and the mayor of Trent, Alessandro Andreatta. Fr Bettega acted as chairperson and introduced the keynote speakers. Milena Mariani is Professor of Systematic Theology and History of Theology of the XX Century at the ‘Romano Guardini’ in Trent and Professor of Mariology in Bolzano.  She delivered an important, farsighted talk about “Europe and the Christian Confessions toward the future”. Lucia Fronza Crepaz teaches at the Social Preparation School of Trent, and her talk had a socio-political theme: “Europe: an encounter of peoples, building up peace!”. During the interval between one speech and the other, two young men of the Neo-catechumenal Way played Beethoven’s Hymn to Joy.

The buffet which was offered in the adjacent hall was highly appreciated and it was an opportunity to share and make new acquaintances.

The Feast continued with an ecumenical Prayer Vigil which was held at the Immaculate Shrine, which is run by the Alliance Dives in Misericordia. The Vigil consisted of prayers, hymns (two of which were provided by the Orthodox community) and reflections – all done in an atmosphere of deep recollection. Among other texts, the messages of Pope Francis, of Patriarch Bartholomew I and of the Lutheran Bishop Bedford Strohm, which were delivered to the Munich 2016 meeting, were read out. The contributions of Fr Joan and the Lutheran coordinator Berbel were quite meaningful. The former underlined the correlation between the “cultural” input which preceded the Vigil, whereas the latter highlighted the common aims of the Christian Confessions which could, and ought to be enhanced, like reconciliation and peace, the care of the environment, solidarity with the poor and the downtrodden. Fr Bettega augured that such events may be repeated, and that other local entities be asked to participate. As a sign of practical sharing, the money collected was destined to help the refugees presently in Trent. 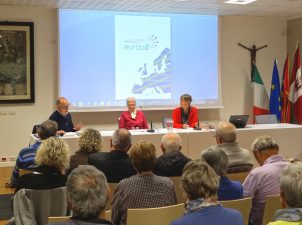 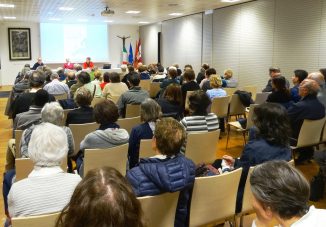