Visible, inviting, and European – this is how this “Ecumenical Evening Prayer for Europe” came across in the cathedral church of Vienna, the Stephansdom.

Members of the ecumenical network Together for Europe at the heart of the Austrian capital city, at the vigil of their annual Congress. They came from countries such as Portugal, Russia, England, and Greece.

Their aim: unity and reconciliation among various Christian denominations and cultures, as well as solidarity and integration within Europe. 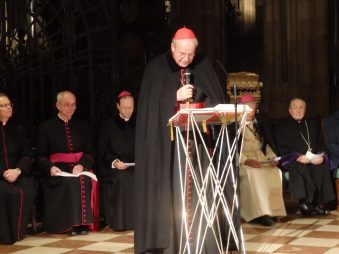 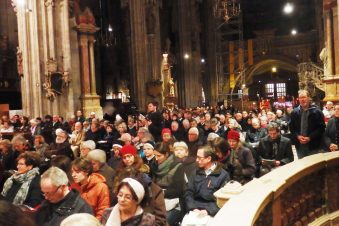 Cardinal Christoph Schönborn lead an ecumenical group of representatives of various Churches: hundreds of people gathered under the “Lettner” Cross which is a significant memorial of the victims of the two world wars. “People today do not expect us to rule, but to serve,” the Cardinal emphasized in his speech. The solemn prayer for a TOGETHERNESS of cultures and generations and for peace resounded powerfully.

“This moment of prayer was a multilingual, visible, and European sign of hope,” said one of the participants, “and it gives us hope for the future.”

At the reception that followed the celebration, Thomas Hennefeld, Superintendent of the Reformed Church of Austria and President of the Ecumenical Council of Churches in Austria, and Joerg Wojahn, Head of the European Commission Representation in Austria,  underlined that Christian values are the basis for a united Europe. “We need everybody,” exclaimed the representative of the EU.

After November 9, 1938 (the Night of Broken Glass) and November 9, 1989 (fall of the Berlin wall), couldn’t November 9, 2017, day of the ecumenical prayer, be a significant step on the road of Together for Europe and a sign for Europe? 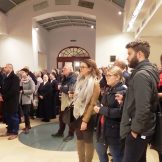 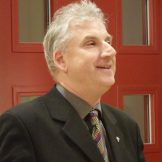 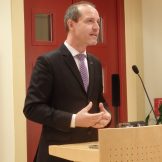 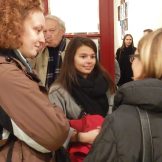 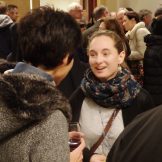 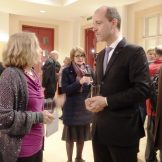 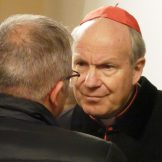 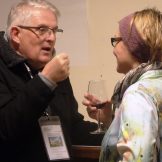 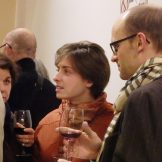 2 thoughts on “Vienna Cathedral at the Centre of Europe”