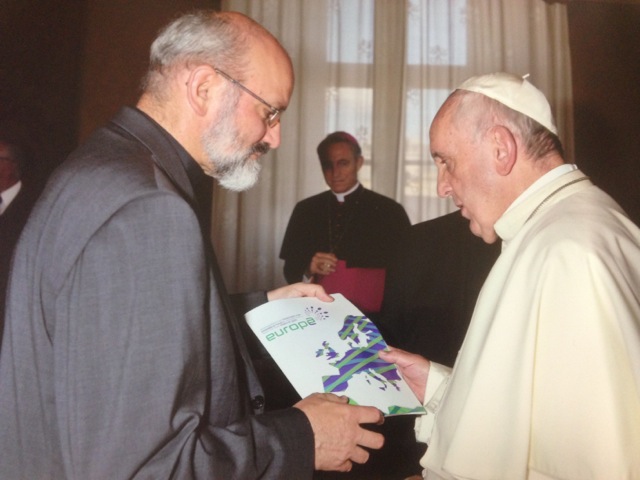 “In recent months we have been looking for ways to tell Pope Francis more about our network called “Together for Europe “. We wanted to invite him to contribute via video to the public rally on 02/07/2016 at the Karlsplatz in Munich.

Then, when it became clear that on 3 September I would be presented with the opportunity to briefly speak to him during a private audience in occasion of the General Chapter of the Schoenstatt Community, I gladly accepted. The day before I had received the freshly printed brochure in Italian from the International Secretariat of “Together for Europe” in Rocca di Papa.

I knew that an audience should not be used for advertising purposes, but I took courage and explained our plans to Pope Francis in Spanish. I shared with him how our ‘Together’ had begun 15 years ago and had proceeded under the guidance of the Holy Spirit. I explained which movements take part and mentioned its ecumenical character and that we wondered if he would record a video to be shown at the rally. He listened very attentively, and as though he wanted to acknowledge what he heard, then said with a grin: “Shall we do it straight away ?!” Immediately afterwards I got a chance to speak to his secretary, Archbishop Gänswein, and learned that they know about our network and that we should formally present our request again in writing in few months time. “